MAOXIAN, China, June 22, 2020 /PRNewswire/ — The tourism authorities of Aba Tibet and Qiang Autonomous Prefecture, more informally known as Aba Prefecture, an autonomous prefecture in the northwestern part of Sichuan province, presented a series of exhibitions and performances at the ancient castle near the entrance to Maoxian Qiang Ethnic scenic area in the prefecture’s Mao County from June 12 to June 13, 2020, as part of China’s celebrations for Cultural and Natural Heritage Day 2020. 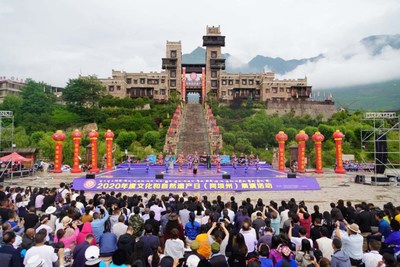 The event started with exhibitions and performances with a focus on Aba Prefecture’s iconic intangible cultural heritage, including Tuigan and the Qiang flute. Tui Gan is a unique traditional sport favored by the Qiang ethnic group, who usually celebrate festivals, weddings and harvests with a few rounds of the popular competitive game.

Event participants gained a deeper understanding of the local intangible heritage with the presentation of several traditional musical performances featuring some of the area’s most iconic folk songs, including Bang Jin Mei Duo, Da Mai Ge (the "Thrashing Wheat" song), Zhusangsang (the last being a folk song of the Tibetan minority located in the western part of Sichuan Province) and other polyphonic Qiang songs, as well as Sheepskin Drum Dance and other dances meant to celebrate the annual harvest as well as the Waerezu and Qiang New Year festivals.

The event boosted visitor engagement by combining online and offline experiences at Sha Lang Square, another locale within the scenic area. Members of the local community who were designated as inheritors showcased 16 traditional handicrafts and instruments that form part of the area’s intangible cultural heritage, including several examples of Tibetan Cross-Stitch Embroidery, Qiang Embroidery and the Qiang flute. The exhibitions were also live streamed on Taobao.com by individual podcasters, online influencers and intangible cultural heritage inheritors in a move to promote sales of the items displayed.

Intangible cultural heritage inheritor Namu Gesang gave an onsite presentation on the topic of Tibetan Cross-Stitch Embroidery. She had been interested in local crafts since childhood and learned the traditional skill from her mother and grandmother. The Tibetan embroidery handicrafts that she made are now available throughout China. She said, "As an ancestral handicraft technique, it must and will continue to be passed down. These crafts are 100% made by hand and incorporate traditional Tibetan knitting and embroidery elements enhanced by traditional color and pattern designs."