SHANGHAI, June 10, 2020 /PRNewswire/ — At 09:09 AM June 5 local time, a China Eastern Airlines (CEA) "passenger to cargo" flight MU7263 took off from Jinan to Milan fully loaded with over 20 tons of supplies. This is CEA’s 22nd flight transporting medical equipment directly from China to Italy. 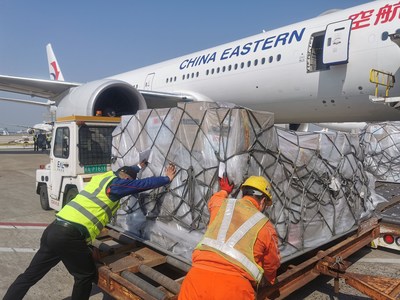 The flight to Italy was uploading medical supplies

CEA performed 300 cargo flights per week recently. As of May, CEA performed accumulatively 4,000 flights involved in humanitarian and relief missions, carried 23,000 medical personnel and transported 10,000 tons of medical supplies among 20 countries across the globe.

CEA is leading to use "passenger to cargo" planes for global medical supplies. CEA has transformed 14 A330 passenger planes by removing seats; consequently the original 90 square meters space is doubled. As the main type of plane model on the route between Europe and China, the modified A330 planes play a more important role during the special time. CEA transported 2,000 tons of medical supplies to Europe, connecting lives between China and over 20 cities in Europe.

Pushing the time to February, CEA Europe Marketing Center has been working around the clock to coordinate with all the European airports, refund tickets and redesign travel routes for passengers. At the busiest time, Europe call center handled more than 4,000 emails and a sea of consultation calls in just one weekend.

In terms of employee protection, CEA has timely issued guidelines on internal work environment, daily prevention requirements and care measures for 100 thousand employees, especially for the people in Europe who stand out in the busiest frontline. The preliminary preparations have played an essential role in handling the following hard time.

Resting at home, CEA’s European employees did not forget about people around. Giada Pulcinelli, an Italian flight attendant, helped neighbors with limited mobility to purchase necessary supplies; initiated a public welfare fundraising to provide food for people. She keeps online learning for the best professional status to gets ready to the sky at anytime.

Headquartered in Shanghai, CEA is one of China’s three major airlines with 18 subsidiary companies and 109 sales offices worldwide. After 63 years of development, CEA’s fleet has reached more than 750 aircrafts with an average age of 6.4 years. As a SkyTeam member, CEA’s route network reaches more than 170 countries and 1,036 destinations, serving more than 130 million passengers worldwide each year, and the passenger traffic ranks among the top 10 in the world. In June 2016, CEA has opened four European routes in a week consecutively.

The events unfolding this week have shown clearly that Malaysia did not have any Emergency...

Malaysia has seen a rise in scaremongering around what has been termed ‘the obesity crisis’....

About Us
Placemaking
Resilience
Analytics
Conservation
Media Room
Contact Us