A week of special coverage begins December 21, with a 30-minute program airing December 26-28

HONG KONG, Dec. 18, 2020 /PRNewswire/ — While the global pandemic has left many unable to travel, an international community of Indian chefs is championing the many tastes of India from afar by bringing the food of their hometowns to some of the world’s finest restaurants. This month, in a 30-minute-special, CNN’s ‘Reconnect’ delves into this rich and diverse nation through the eyes and dishes of India’s culinary pioneers. 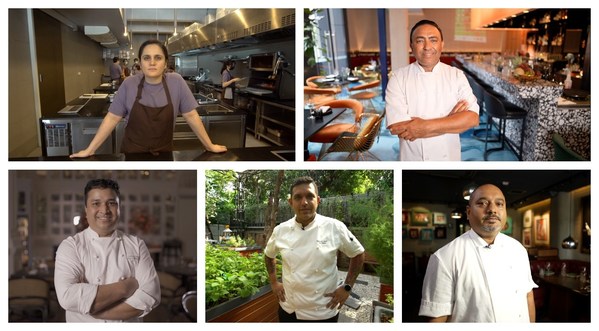 For chef Palash Mitra, cooking Bengali fish curry, or macher jhol, is the one thing that never fails to take him back to his hometown of Kolkata. The city is renowned for its colourful festivals including the Durga Puja. This year with festivities forced to go virtual, food became a way for Mitra to celebrate his heritage from afar. In his Michelin-starred restaurant in Hong Kong, he has been serving up Kolkata traditions to a whole new audience.

In a village just outside of the Northern Indian city of Chandigarh, chef Jessi Singh grew up living the true farm to table experience. Singh would milk the buffalo, churn the milk, and spread the ghee on home-baked bread. CNN learns how the now Melbourne-based chef is bringing this fresh philosophy to his family of restaurants, by serving up dishes that pay homage to his relatives and village upbringing.

Chef Garima Arora is the first and only female Indian chef to earn a Michelin star, and was rated Asia’s top female chef in 2019. But beyond her accolades, Arora is also spotlighting India’s uncharted culinary diversity through her non-profit organization, ‘Food Forward India’. Last year, Arora and her team committed to mapping out the cuisine of every state in the country. She started with Telangana, the state she was born in, finding inspiration for several new dishes at her restaurant in Bangkok.

Growing up in Delhi, chef Kuldeep Negi learned his craft from the colourful food and spice stalls of the centuries old Chandni Chowk market. Today, Negi is keeping the essence of Delhi’s bazaars alive at his renowned restaurant in Singapore. One of his best-sellers is tandoori prawns, which celebrates the distinctive smoky flavours of Delhi’s tandoors alongside the fresh ingredients available in his new home.

For chef Deepanker Khosla, mutton biriyani brings back memories of his childhood in the Uttar Pradesh city of Prayagraj. Inspired by his home, Khosla built a sustainable restaurant in the heart of Bangkok. The restaurant farm conserves rainwater to raise hundreds of fish and over 40 varieties of plants. When the pandemic put restaurant dining on pause, Khosla began serving up his signature biryani to 15 different communities each day.

CNN’s portfolio of news and information services is available in seven different languages across all major TV, digital and mobile platforms, reaching more than 475 million households around the globe. CNN International is the number one international TV news channel according to all major media surveys across Europe, the Middle East and Africa, the Asia Pacific region, and Latin America and has a US presence that includes CNNgo. CNN Digital is a leading network for online news, mobile news and social media. CNN is at the forefront of digital innovation and continues to invest heavily in expanding its digital global footprint, with a suite of award-winning digital properties and a range of strategic content partnerships, commercialised through a strong data-driven understanding of audience behaviours. CNN has won multiple prestigious awards around the world for its journalism. Around 1,000 hours of long-form series, documentaries and specials are produced every year by CNNI’s non-news programming division. CNN has 36 editorial offices and more than 1,100 affiliates worldwide through CNN Newsource. CNN International is a WarnerMedia company.