SHENZHEN, China, Dec. 16, 2019 /PRNewswire/ — Air+ Style World Cup is officially open in Capital Steel, Beijing, Dec 12th, 2019. A grand light show is held in the meantime. Powered by Appotronics (https://en.appotronics.com/), Poly Culture and Digital Domain, the show lights up every scenery around, presenting a modern visual effect of an integration of sound and light.

Covered by a total number of 45 units of Appotronics Large Venue Projectors, the total projection area of the show stretched over an astounding 14,000㎡. All Appotronics projectors used in the project has adopted the ALPD ® (Advanced Laser Phosphor Display) technology (https://en.appotronics.com/alpd_tech.html) with its independent intellectual property system and has lighted up this event with outstanding image quality. The ALPD laser display technology, featuring high efficiency, high contrast, wide color range and high reliability, is now the mainstream technology used in the laser display industry. It is the only laser display technology that has been commercialized on a large scale. 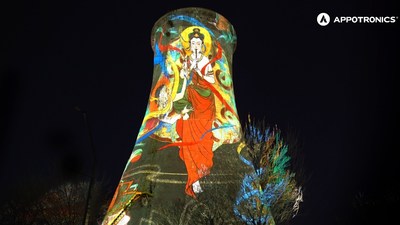 The outstanding image quality of Appotronics projector at a distance of 260m away from the tower.

Breathtaking Design of the Ski Platform

From far, Capital Steel ski jumping platform looked like a ribbon of Feitian (a breathtaking image in Chinese mural culture). Being under the Shijingshan Mountain makes this scenery even more magnificent. The design of Capital Steel ski jumping platform integrates the elements of "Feitian" in Dunhuang Fresco, a famous world cultural heritage in China. The track of the platform is 164 meters in length, 34 meters at the widest and 60 meters at the highest.

Viewing from the auditorium, the entire "Feitian" platform and the sceneries around are lightened up by projectors, forming a beautiful picture. With three themes of "Flying Snow", "Capital Steel for One Hundred Years" and "Sports Spirit", the light show presented a new image together with Capital Steel’s centennial history.

With ten ALPD 4.0 Large Venue Projectors of Appotronics, the audience will get extremely accurate images of the light show. The ALPD 4.0 light source technology surpasses the cinema level image quality performance, and covers 98.5% of the Rec2020 color gamut, realizing the accurate restoration of "Feitian" in Dunhuang murals, and making a beautiful arc of Feitian in the night sky, providing a strong traditional historical and cultural presentation.

Standing on the bank of Qunming lake, the three cooling towers in Capital Steel Heritage Park has witnessed the changes of Capital Steel in the past 100 years. The 180° projection of the tower surface in the light show forms the best viewing angle at the audience position of the sightseeing gallery and the Feitian platform. The projection area of a single cooling tower is 3600 ㎡ and is covered by a mix of Appotronics’ 60K and 40K lumen projectors.

The ALPD 4.0 laser technology adopted in the light show is about 30% higher in term of efficiency than the last generation, yielding world-leading high brightness and impeccable picture quality at 4K resolution. The image is crisp and vivid with high brightness from the 60K lumen Appotronics projector even at a distance of 260m away from the tower. It is the ideal system for large-scale outdoor structural projection with the highest image quality.

60,000 lumen ALPD ® Large Venue Projectors of Appotronics is the brightest integrated miniaturized machine in the industry at present. Its volume is only equal to the size of the same brightness product mainframe in the same industry. This makes installation and implementation of projector as convenient as possible. For the small cooling tower at the entrance of the park, 40,000 LM laser highlight engineering projection equipment is used. The tower surface is surrounded by 270° projection, and the peripheral perspective can be viewed.

The team that created this grand light show of Capital Steel is also the creator of "The Night of Lantern Festival" at the Forbidden City in Feb. 2019 where Appotronics used the ALPD ® technology to light up the entire Taihe Gate of 3,000㎡ at Forbidden City.

With the passion of using technology to change people’s life, Appotronics is committed to the research and innovation of laser display technology and products, constantly enriching the choice of people’s life, to meet people’s new requirements for information display in the era of high-speed communication and artificial intelligence, and continually to pursue the ambition of "new light, new life".