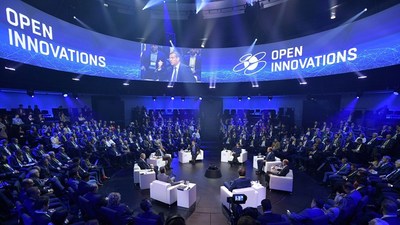 655 speakers from over 100 countries participated in 150 discussions. More than 160 startups presented their projects to potential partners and investors. From October 21 to 23, over 20,000 people attended the forum.

Russian Prime Minister Dmitry Medvedev addressed the plenary meeting "Intelligent Economics. Three dilemmas for the digital nation," outlining the main challenges that digital transformation poses to society, government and business. This is cybersecurity of personal data, the restructuring of the labor market due to automation of production and the legal regulation of the innovation industry. Dmitry Medvedev reminded that in a year Skolkovo will celebrate the 10th anniversary, and guests to visit Open Innovations in 2020 – "see what has been done over these 10 years and what remains to be done."

The first-day theme of the Forum was "Digital Man." Experts discussed issues related to the impact of technologies on human life. The second day was devoted to the "Intelligent Economy" – digitalization of industry and other industries, corporations, technological entrepreneurship. Finally, discussion of "Future Technologies" – new tech trends in the field of medicine, artificial intelligence, insurance, industry, and retail.

Within the framework of the "Open Innovations" Forum, the global technology conference "Sooner Than You Think: Smart Cities," organized by Bloomberg Agency and the Skolkovo foundation, and the practical business forum about artificial intelligence systems RAIF (The Russian Artificial Intelligence Forum) were held. In these three days, 29 agreements were signed with the participation of Russian and international companies, foundations and development institutions.

Source: Representatives From Over 100 Countries Took Part in the "Open Innovations" Forum in Moscow