CHANGSHA, China, Nov. 26, 2020 /PRNewswire/ — Co-produced by Mango Excellent Media, Mango TV and Discovery, the first transnational employment reality show named THE DAY I RAN CHINA II is now on hit. The show invited ten foreign youth with different nationalities, career and professional background to explore the "Kungfu" that China adopted for poverty alleviation in the countryside, and to witness the China’s achievements in building a moderately prosperous society in 2020. It depicted a vivid image of China’s economic development and building a moderately prosperous society through opening-up to the whole world. 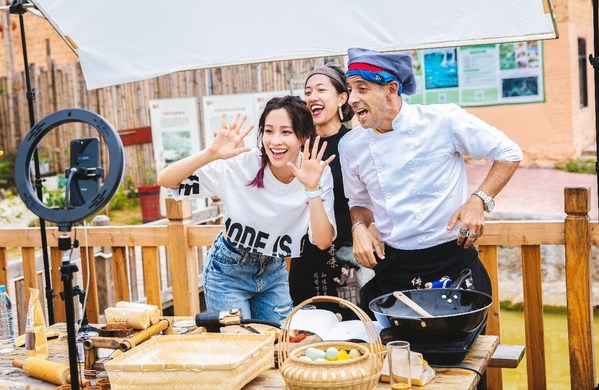 By visiting Hunan, Zhejiang, Sichuan, Guizhou, Guangxi, Yunnan, Ningxia and Inner Mongolia, they traveled a long journey through coastland, inland, plateaus, basins, mountains and grasslands. These nine special poverty alleviation areas have become their training camp in practice. "RAN" is the keyword in this season. The show well presented the fruits of rural vitalization, on account of adopting measures according to local conditions and formulating suitable policies regarding poverty alleviation by extending their advantages and avoiding the disadvantages. A picture of poverty alleviation in China is being slowly revealed by presenting these nine areas.

In Zhangyi county, Hunan province, the international youth experienced the life of "Internet farmer celebrity". Phones became their new farm tools, and broadcasting turned to be their new farm work. In Hani terrace in Yunnan province, they discovered the poverty alleviation model of tourism with local characteristics and witnessed how the agricultural heritage became alive. In the southern mountain area in Ningxia province, they learned why it is named as "The Land of Cold Vegetables in Western China".

Over the years, Chinese farmers have always been working diligently and down-to-earth for their better future. THE DAY I RAN CHINA II presented the rich fruits of "targeted poverty alleviation" through the foreign youth’s perspective and depicted a vivid view of China’s prosperous society. It will help the whole world see and feel more of the extraordinary features and power of China.

Source: THE DAY I RAN CHINA II: Exploring the Development of a New Socialist Countryside to the World