YUNCHENG, China, Oct. 11, 2019 /PRNewswire/ — On Sept. 29, the Salt Lake District, Yuncheng city, north China’s Shanxi Province, on Sunday shared with the world for the first time some of the local governments’ practices and explorations in social governance in the form of a "blue book", according to the Publicity Department of the Salt Lake District Committee of the CPC. Li Guodong, the member of the Blue Book writing team and vice president of Peking University’s Boya Strategy Group, said that the Blue Book is entitled "The Practice and Innovation of Salt Lake District in Chinese Virtue and Filial Piety Culture", which is divided into four chapters: History, Practice, Innovation, and Prospect. 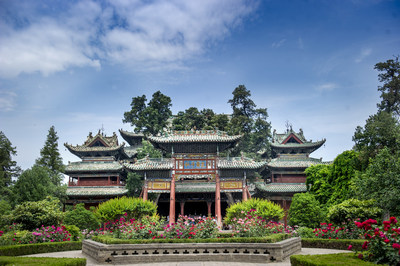 "It reviews, summarizes and deeply analyzes some good practices of the Salt Lake District in the past 10 years, and also reflects its potential, direction and path in the future development," Li Guodong said.

Yuncheng, known as "Hedong" in ancient times, is located in the core area of the birthplace of Chinese civilization. It is the legendary hometown of Emperor Shun and Chinese culture of virtue and filial piety. In China, there are many stories about Shuns’ filial piety to his parents.

According to the legend, Shun’s virtues moved heaven and earth, when Emperor Yao retired, people recommended Shun as his successor. They made a cadre investigation and democratic evaluation of Shun. The results showed that Shun was highly recognized by all.

"The code of conduct and moral ideas advocated by the virtue and filial piety culture still has practical and strategic significance for today’s global social governance," said Xue Yongqi, deputy secretary of the Salt Lake District Party Committee and district governor, at the press conference.

It is reported that since 2010, the Salt Lake District has established a benchmark for the virtue and filial piety culture, established a reasonable reward mechanism for outstanding representatives, and continuously improved the practice network system of the virtue and filial piety culture, making it a theme, a goal and a carrier for all the activities in the society which produced certain influence and dissemination value in China.

By carrying out the culture of virtue and filial piety, the Salt Lake area has promoted the custom of respecting the elderly and the revitalization of rural culture and economy.

Source: The Hometown of Chinese Virtue and Filial Piety Culture shares "ten years of experience" with the world