HEFEI, China, March 9, 2020 /PRNewswire/ — "Welcome to Beautiful Anhui", the promotion video of Anhui culture and tourism was played on "China Screen" of New York Times Square on March 5th, 2020, the local time. According to Xinhua Screen Media Co., Ltd., who tenants the China Screen at New York Times Square, the video played on the "China Screen" will last for one year to show the beautiful natural scenery and precious world cultural heritage of Anhui to the world. 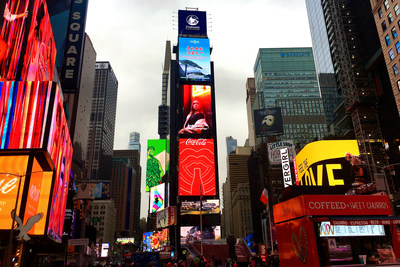 The promotion video starts with the beautiful scenery of the world-famous mountain — Mount Huangshan, such as the sea of clouds, strange peaks and various shaped rocks, making the audience truly resonate with Xu Xiake’s feeling that "You have no wish to visit any other mountains after viewing the Five Mountains, you do not even wish to visit them after you come back from a trip to Mount Huangshan." "A Village in Chinese Paintings", Hongcun village and Xidi ancient village, known as the "the Village in the Land of Paradise" are presented in turn in the promotion video. The classic Hui style ancient dwellings are leaning on the beautiful mountains and the households are embraced by the clear water, showing a peaceful scenery. The fields around the villages are full of golden rapeseed flowers, which is fascinating.

Anhui has a variety of famous mountains, beautiful rivers and outstanding people, including Mount Huangshan, Jiuhua Mountain, Qiyun Mountain, Tianzhu Mountain, etc.; the Yangtze River and Huaihe River pass through the territory, and Xin’an River has carried the dreams of Anhui people for more than a thousand years. They are full of vitality, and generations have nurtured the people of Anhui; since ancient times, there have been many famous people in Anhui, including Laozi, Zhuangzi, Cao Cao, Hua Tuo , Bao Zheng. Their spirits still have a deep influence on later generations.

Anhui’s "Hui" character, up and down parts mean the mountains and rivers, left and right ones represent the humanities, together showing the combination of landscape and humanities, and the cultural integration between North and South culture. "A lifetime of infatuation that I am addicted to is actually reaching Anhui not only in dreams but as a real fact" is praised by Tang Xianzu, the great Chinese dramatist. Although the 30-second promotion video only shows a small part of the beautiful Anhui Province, it is enough to show the unique charm and rhyme of Anhui. Nowadays, Anhui Province is brimming with vigorous vitality. It welcomes visitors from all over the world with openness and innovation!