YICHANG, China, Dec. 11, 2020 /PRNewswire/ — As of November 15, 2020, the "Travel to Hubei with Love" campaign has been carried out for 100 days, and the comprehensive benefits of Yichang tourism are constantly increasing. According to data released by The Culture and Tourism Bureau of Yichang City, 41 A-level scenic spots in Yichang had received 6.059 million tourists as of November 18, 2020. The city also received reservations of 204,000 tourist groups, ranking first in Hubei province. 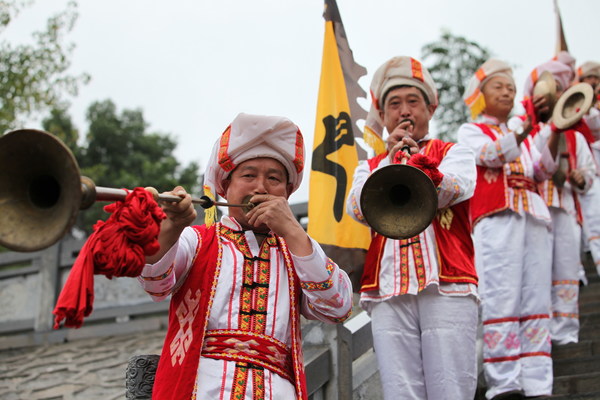 "Listen to me sing, my friend; sing about a young lady scolding a wooer…" Boating on the Qingjiang river, one can always hear long shouts from both sides of the river, loud and vigorous, brimming with full enthusiasm. Looking around, one only hears the sound but does not see the singer, with the lingering sound reverberating in the mountains.

The unsophisticated singing is Changyang Folk Songs, which have a history of more than 3,000 years and a wide range. The singing comes straight to the point and takes the lead, with the vibrato having a strong special tone and wild flavor. In 2008, Changyang Folk Songs were included in the National Intangible Cultural Heritage List. Cao Feng, a performer of the folk songs, is the representative inheritor of the 10th batch of Yichang municipal intangible cultural heritage projects.

On top of Yichang’s Wuluo Zhongli Mountain, folk songs and dances are everywhere. "When spring goes to summer, it is autumn again. The storm and waves fade away the years, and the lotus forest bids away spring and welcomes autumn…" Immersed in the sounds of Sanxian, Erhu and Pipa, Wang Mingjun, an inheritor, sings against the background like a frame of freehand brushwork. A few words can make people intoxicated with the charming Qingjiang scenery.

In the Wuluo Zhongli Mountain Square, where the ruins still exist, Bashan folk dancing springs to cheerful rhythms. Whether the people dancing, or people watching, everyone’s face is filled with happiness to the bright dancing clothes.

Walking along the Qingjiang Gallery, the national 5A scenic spot, one will be greeted by the rich Batu culture, such as Tujia folk dancing, Xilankapu ethnic costumes, Tujia delicacies and traditional handicrafts…

In recent years, Yichang of Hubei province has integrated the Yangtze River culture into the development of tourism, conducted in-depth research on the cultural connotation of the Yangtze River, promoted the creative transformation and innovative development of excellent traditional culture, and relied on tourism to show and enhance cultural charm, which not only makes the culture come to life, but also injects sustainable impetus into tourism.

In the Three Gorges scenic area, the weeping marriage performance with strong Tujia ethnic characteristics, after rearrangement, brings a new experience for tourists with a more interactive sense.

In the scenic racecourse of Yuan’an marathon, local intangible cultural heritages such as folk songs, plays of gongs and drums, and operas are staged. Runners listen to the ancient sound of remote mountains that has been inherited for 200 years while racing in the scenic field.

In Qinglong Village, Yiling District, there is an active lion dance team on stilts. They are the inheritors of folk culture and art, and their unique skills attract tourists who come to experience the pastoral scenery, which adds cultural charm to the rural tourism.

Yichang is the origin and fusion place of Ba culture and Chu culture, which was home to Qu Yuan, a world cultural celebrity, Wang Zhaojun, the messenger of national harmony, and Yang Shoujing, an outstanding scholar in the late Qing Dynasty. The Sanyou Cave, or the Three Travelers Cave, bears the carving of the classics of the three most famous poets of the Tang Dynasty — Baixingjian, Baijuyi, and Yuanzhen, and Su Xun, Su Shi and Su Zhe, the most famous literature family in Northern Song Dynasty. Changbanpo Battlefield witnessed the heroic deeds by Liu Bei, Guan Yu, Zhang Fei who galloped across the battlefield with great ambition in Chinese history.