The coastal city of Yantai in East China’s Shandong province is expanding into global markets with one of its specialty agricultural products－apples. 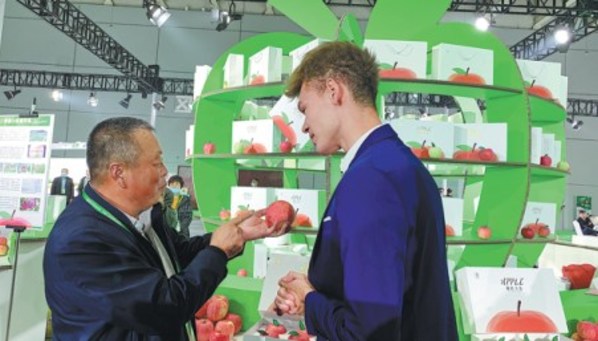 An exhibitor at the first China Shandong International Apple Festival shows his fruit to a foreign visitor. ZHANG DANDAN/CHINA DAILY

The first China Shandong International Apple Festival was held in Yantai from Oct 27-29, showcasing more than 300 agricultural enterprises to the world.

"As the birthplace and largest production area of apples in China, Yantai is using the China Shandong International Apple Festival as an opportunity to invite industry players worldwide to share their insights and conduct negotiations and cooperation, especially in terms of apple planting, seedling cultivation, intensive processing, warehousing and logistics, leisure tourism and market promotion," said Zhang Shuping, Party secretary of Yantai.

After four years of cultivating the land, Haolin had its first harvest season in October, with a yield reaching two metric tons per mu (0.07 hectares). The output is expected to grow substantially next year, achieving three to four tons per mu, according to the cooperative.

Joining hands with Shenzhen Pagoda Industrial Group, a company focusing on fruit procurement, planting support, fruit logistics and storage and marketing, Haolin has developed a new variety of Fuji apple, which has been well received by the market, said Zheng Wenbin, a sales manager with Haolin Fruit Cooperative.

The cooperative secured an order of 100-150 tons of apples from Pagoda even before their first harvest, thanks to its apple planting standards and apple quality, Zheng added.

Haolin’s apples are not only available in supermarkets in first and second-tier cities nationwide, but also exported to some Southeast Asian countries, including Indonesia and Malaysia.

Yantai is home to rafts of apple growers like Haolin. By the end of 2019, the city had 188,400 hectares of apple orchards producing 5.59 million tons of apple annually, ranking first among all prefecture-level cities in China, according to the local government.

Yantai Kangleda Food, a supplier of dried and canned fruit, showcased its products at the China Shandong International Apple Festival.

"Our apple products are mainly exported to countries including Russia, Kazakhstan, Japan and India," said Kong Weijing, a salesperson at the company.

Kong attributes the favorable market results to Yantai, the birthplace of high-quality apples. "Yantai apples are rich in sugar and very crisp, and so conducive for processing into other apple products."

Based in Yantai, the company benefits from the city’s convenient transportation and logistics.

"For us, a processing company, logistics is really important. If the transportation takes too long, that affects apple preservation," Kong said.

Giardino Estate is a sparkling wine producer in Yantai, which uses locally grown fruit such as grapes, cranberries, peaches and apples.

With production starting in 2018, Giardino Estate now has an annual production capacity of 6,000 tons of wine, according to Wu Yeshao, owner of the company.

"As we are in Yantai, a core apple producing area in China, we enjoy stable supply of the raw material," Wu said. "Also, Yantai is a tourist destination because of its charming coastal scenery. With more tourists coming here, our products are becoming more popular."

The integrated development of industries is commonplace in China, so Giardino Estate, as well as producing wine, hopes to become a local tourist attraction, with a visitor experience center at its production base.

With its wines well received in both domestic and overseas markets, Giardino Estate achieved a sales volume of 50 million yuan ($7.49 million) in 2019, according to Wu.

Apples in Yantai not only have a rich history, but they are also playing an important role in rural revitalization.

On the opening day of the China Shandong International Apple Festival, four sisters from Yantai’s Penglai demonstrated the latest craze in business models across China－livestreaming.

The sisters had previously left their home village of Tianjia to pursue education and careers in big cities, but have since returned to explore local business opportunities.

Tian Chunying, the eldest sister among the four, said they use livestreaming to promote the local produce of the village and sell it via e-commerce platforms to expand the scope of the previously remote market.

"Our village has 90 households in total, and everyone grows apples," Tian said. "Before, our village had poor transport links and weakness in connectivity to technology."

That has since improved, and so the four sisters, who majored in internet, advertising, marketing and tourism at university, returned to Tianjia to set up a business.

"Our original intention was just to help more villagers sell apples and agricultural products. And gradually, our business grew to cover the town, the city and even Shandong province," said Tian.

The sisters have forged marketing channels with domestic e-commerce platform JD and Alibaba’s high-end supermarket Hema Fresh, and set up their own online stores on Tmall and JD.

Through these channels, the sisters sold more than 1,500 tons of apples in 2019. They achieved a sales volume of nearly 60 million yuan last year, 40 percent of which was generated by apples, according to Tian Chunying.

Looking ahead, she said she hopes more farmers can utilize the internet and mobile phones as helpful tools.

"I think farmers will be the spokespeople for their products in the future, as mobile phones can film their planting process and help promote their products," she added.

Source: Yantai's apples at the core of rural development