CHANGSHA, China, Dec. 11, 2020 /PRNewswire/ — Celebrating the 80th Anniversary of Disney’s Fantasia, Changsha IFS and Disney join hands to present Fantasia Wonderland, a first-of-its-kind mall exhibition to debut in Central China. As the leader of innovative art, Changsha IFS has been bringing trendy and artistic collaborations to the city, and from 29 November to 31 December, Disney magic apprentices are summoned to the atrium at LG2 of Changsha IFS, bringing festive melody and magic to the city’s landmark and unveiling a wonderful world full of original Fantasia paintings. 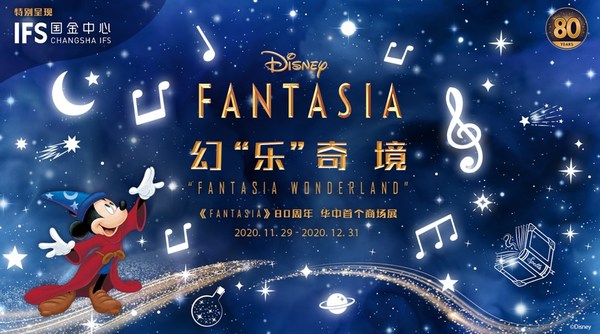 Classic Disney Characters Appear in a Shiny and Magical Winter

To kick-off the 2020 winter season and the 80th anniversary of Disney’s Fantasia, Mickey, the world’s most beloved magic apprentice, has been appointed as Changsha IFS’s ambassador this season to give extraordinary blessings to all and bring an unprecedented winter fantasy to everyone in Changsha. During the opening ceremony on November 29, Ms. Zeng Yajing, Marketing Director of Changsha IFS, and a group of junior magicians from YATO took the stage to welcome guests and unveil Fantasia Wonderland.

First-of-its-kind Exhibition Debuted in Central China, Perfectly Restores and Transforms the Best Classic Scenes of the Film into an Immersive Experience

Fantasia Wonderland showcases the classic movie scenes from Fantasia. The exhibition begins with a full review of the film’s eight signature scenes, appreciating the beautiful blend of classical music and animation. It is followed by several photo-friendly installations infused with Fantasia elements like "Magic Hat," "Magic Chair," "Magic Pool" and "Magic Book," offering an immersive and interactive experience for visitors to follow Sorcerer Mickey on a magical adventure. From the star-and-moon projection in "Magic Hat" to the sensory audio effect of "Magic Pool," the interactive multimedia installations present realistic movie scenes with the combination of audio-visual and shadowing effect in three-dimensional atmosphere.

Explore Multi-Interactive Experiences and Enjoy Warm Festivities in the City

Come explore the magical space of Fantasia Wonderland and take photos with the various Fantasia 80th anniversary icons across the exhibition. Scanning the QR code of the icons to send the best wishes from Fantasia to family and friends. Visitors are also encouraged to take interactive photos with Sorcerer Mickey to record their special  memory.

ABOUT THE WHARF GROUP

The Wharf (Holdings) Limited was founded in 1886, with the mission of "Building for Tomorrow". The Group’s business also includes property investment and development, logistics, hotel, communication, media, entertainment, and public communication. Wharf is active in property development in mainland China. In addition to the Times Square project in Chongqing, Dalian, Shanghai, and Wuhan, International Finance Square (IFS) is becoming the flagship brand in mainland China, representing the group’s vision of the commercial complex that will excel in the future. IFS projects have been launched in the cities of Chengdu, Chongqing, Changsha, Suzhou, and Wuxi. IFS is joining Harbour City and Times Square to become one of the big names of the group with comparable importance, positioning and scale.

Wholly owned by The Wharf Group, Changsha IFS, occupying an area of around 74,000 m², is located in Wuyi commercial district, the CBD of Changsha, adjacent to Huangxing Road and Jiefang West Road. The project offers over 1 million m² of integrated components, including a 250,000 m² world-class mall, two Grade-A office towers and a five-star hotel. IFS mall features a wide range of international fashion brands, lifestyle shops, fusion restaurants, entertainment venues and more, energizing the city with a one-stop shopping, dining and entertainment experience.

Fantasia is an animated film produced by The Walt Disney Company. It is the world’s first movie using stereo sound and premiered in the United States on November 13, 1940. Fantasia does not have a traditional movie plot, but a great combination of music and art for the first time. It is a step-by-step work in the history of animation film.